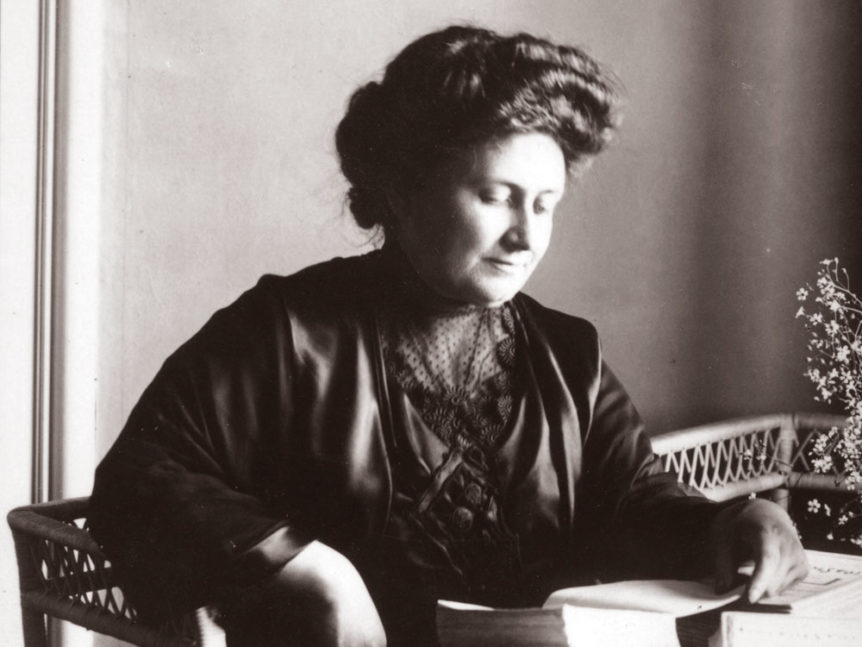 Maria Montessori was born in Italy in 1870 – the year of Italy’s birth in the midst of the Industrial Revolution. During this time, there was an immense boost to the rise of the middle class. Maria’s father was an entrepreneur who wanted his daughter to have a fine education. So at age 4 he enrolled Maria in a technical school, where she studied math and engineering. At age 13, Maria entered a higher-level technical school where she graduated with high marks – unheard of for women at that time. She then entered the University of Rome, studying physics and math, where she also became interested in biological sciences. By age 25, Maria graduated from medical school as a Doctor of Medicine and Surgery – the first female doctor in Italy! (Talk about one proud Papa!)

By 1900, Maria Montessori was the Directress of the Orthophrenic School, a school for “defective children” as they were then known. Maria, following her generous, caring heart, was determined to make a difference in these children’s lives. She researched and came in contact with the works of two French doctors, Jean Itard and Edouard Sequi, who devoted their lives to the education of these children. Under Maria’s skillful direction, the transformation of the children began, as did the gift of the Montessori philosophy.

Maria yearned for her followers to understand that the mind of a child under six years of age is capable of far more than adults realize. She refers to this as the absorbent mind – the ability to “soak up”, to take in full attention. I invite you to show a toddler as young as 1.5-3.0 years of age to “flip” their coat on… within a few tries they will be doing it independently!

“Never help a child with a task at which he feels he can succeed.” – Maria Montessori

As we begin this journey of bringing new ideas and practices to valued CCP Families and Nannies, our hope is that the experience will be one that is “Fun to Flourish” for both child and adult alike.

Introduction to Montessori was last modified: August 17th, 2016 by admin_ccp